Currently I’m living in a place with a kitchen that must hold some sort of record for tininess. There are four drawers, a couple of cabinets, and exactly one countertop. Said countertop is about 2.5 square feet, and that’s literally my entire cooking workspace. Suffice it to say, I need to be wise about kitchen organization if I want to keep from going crazy. Knowing there’s absolutely no room to store things horizontally, I recently went vertical with this magnetic paper towel holder. This DIY works as either a bar to store hand towels, or as a paper towel holder. Either way, the best part is the magnets (side note – every time I think about magnets I can’t help but channel Dwight Schrute’s feeling about them). There is a lot of wasted space on my fridge as far as storage is concerned. Bonus – there’s no hanging damage done, so there’s sure to be a happy landlord at the end of my lease! Begin by cutting the dowel rod to 14 inches in length. This is long enough to store a regular-sized paper towel roll. Sand the rough edge of the dowel with sand paper. Next, cut two strips from the strap material, each measuring 11 inches in length. Fold each strip in half. About 1 inch from the fold, insert a stud through both layers of the folded strap. The stud should join the folded strap together, creating a loop. Use a hard object to fold the feet of the stud closed. Apply a second stud about an inch from the end of the strap, only going through one layer. The second stud should be facing in the same direction as the first. Next, use Gorilla Glue on both sides of a magnet and adhere between the ends of the strap behind the stud. The order should go as follows: stud on top, one end of strap, magnet, and the other end of the strap. To use the paper towel holder, remove the dowel from one of the loops, slide a roll of paper towels on, and put the dowel back in the loop. Easy peasy. As my kitchen is so small, the refrigerator ends up being home to a lot of things besides just perishables. There’s an apron on a magnetic hook, a stack of clipped coupons, plus a bunch of cookie sheets stored on the top. My fridge is a champ. Have any tips for using the most of the space in your kitchen? Let me know in a comment!

Looking for more ways to spruce up your fridge? Check out these printable reminder magnets! 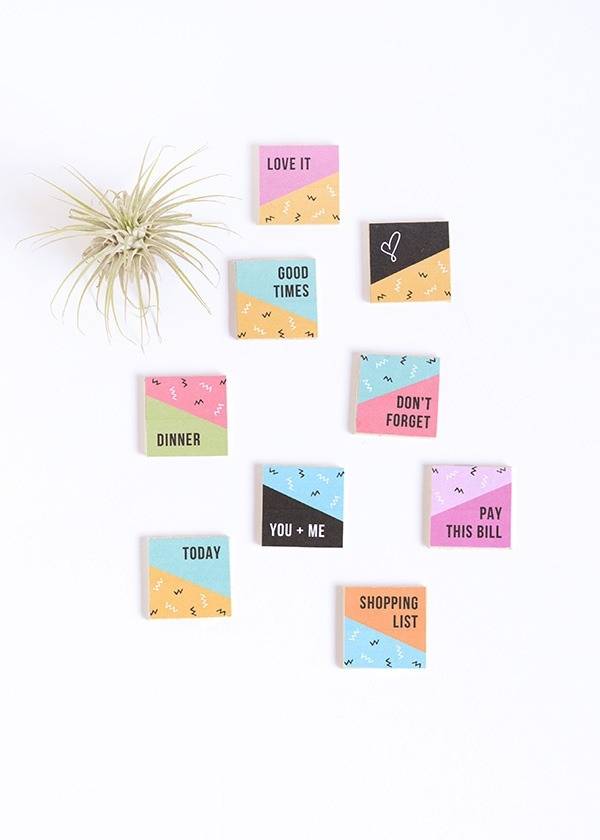