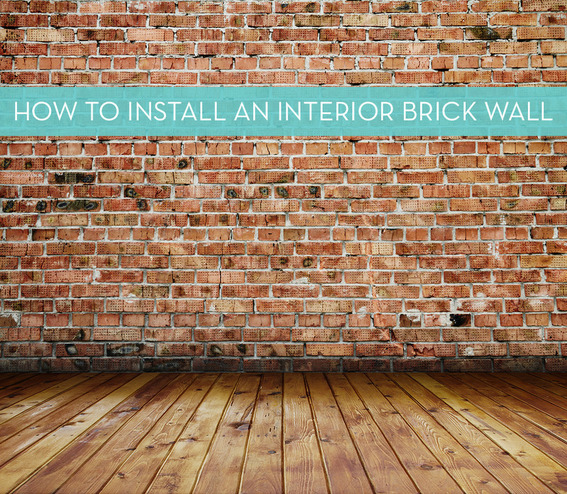 This weekend, we started turning our normal dark beige with orange-peel textured living room wall into a brick wall. We wanted a new york Chelsea kind of feel, so we decided to make the brick wall look old and weathered – like it had been there for 80 years. We decided to turn the main room of our downtown San Diego condo into a brick wall. Earlier, we put down a dark chocolate wood floor with lots of ridges and an earthy feel. We felt the brick wall would add that New York Soho loft feel. We love those old NYC building/apartments that have been there for 80 years and have a ton of character. We were attempting to recreate that feeling in our condo.

To begin with, the condo had that condo cookie-cutter feel. You know, khaki walls with orange peel texture. Beige carpet. B-O-R-I-N-G!

So we thought it would be fun to attempt something new. We used a thin brick veneer and placed it directly over the painted wall using pre-mixed Thin-set. Due to the weight of regular brick, we opted for a thin (1/2 inch) brick veneer. These are real bricks that are about 33% the size of regular bricks. We chose an old “used brick” look because we wanted the wall to appear to have been there for a while. We used a product called Thin Set and applied it directly to the wall. From there, we started on a small section of the wall to get a feel for the layout. We cut the brick with a chisel and hammer and placed each brick one by one.

We didn’t want the wall to appear to straight or perfect. We wanted it a little jacked up. So we didn’t worry too much about having the brick in a perfect line. If you do, then you’ll need to use chalk lines.

After we figured out what we were doing, we moved to the large area of the wall. On Day two, the brick wall started to really come together. We took some of the brick and broke them on purpose to give it a more authentic feel. It was tricky working around the lighting fixtures, electrical outlets, and sprikler heads, but we managed without much incident. We used little plastic spacers to keep the weight of each new row in place. That reminds me, always start from the BOTTOM. If not, your bricks will slide and you’ll have a bitch of a time trying to straighten them up.

After two days, our wall was in place and ready to dry. Thank God. This stuff has a tendency to work back muscles you forgot you had. 🙂 So, here’s a pic of what the wall will look like. Next we still have to grout. More pics on that later. After a few more hours, we installed lighting fixtures and ran them to a dimmer. The glue set against the wall and bricks perfectly. Notice how the bricks are not exactly straight. This is done on purpose to give the effect that the wall was 40-50 years old. 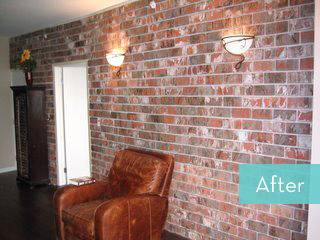 Next, we will be filling in the spacing with grout and then putting up stone crown molding. More pics later! Interested in seeing other accent wall treatment ideas? Check these out… Hey! I moved to downtown San Diego about 2 years ago. Before this, I was at the Beach, but I must sa… read more