Big Sis had a Victorian side chair that she’d been itching to have reupholstered. I suggested painting the fabric with Annie Sloan’s chalk paint. She hadn’t heard about the technique, but she was up for it. She found a local retailer and bought a pot of Barcelona Orange. That was a few months ago. On Christmas day, I noticed the chair, still dressed in its traditional tapestry and asked why she hadn’t painted it yet. She said she had been intimidated by the notion of taking paint to its fabric, and then she asked me if I’d do it. “Sure!” was my reply.

We decided that this would be an experiment. If she liked the outcome, great. If not, she had always planned on reupholstering it anyway. There was nothing to lose. So, Sweetie Pie loaded up the chair and we brought it home.

Before I started painting, I wanted to hear from Annie Sloan herself and how she recommends painting fabric. After watching this video, I was ready to go.

I followed Annie’s suggestion and pre-soaked the fabric with the help of a spray bottle, getting it damp. Then I was ready to start painting, keeping a container of water handy into which I dipped my brush to keep it moist.

To apply the paint, I used a 1 inch diameter stenciling brush to get into the tight places and a regular old stubby paint brush I had on hand to do the larger spaces. In the video, Annie says that you don’t have to worry about getting paint on exposed wood, as you can just wipe it off. That’s true, but I found that only works for the first coat. That’s because the first coat really soaks into the paint. After it dries, it acts like most painted surfaces. Meaning the paint stays on the surface, so when you wipe off the wood, you also wipe off the paint on the fabric. Ultimately, I ended up taping off ALL the exposed wood on the chair, even though I started by just taping off the tricky spots and the areas where the wood was intricately carved.

Annie also says in the video that a coat and a half will do. That might be true for solids, but not for patterns like the tapestry on this chair. Here is what it looked like after one coat: 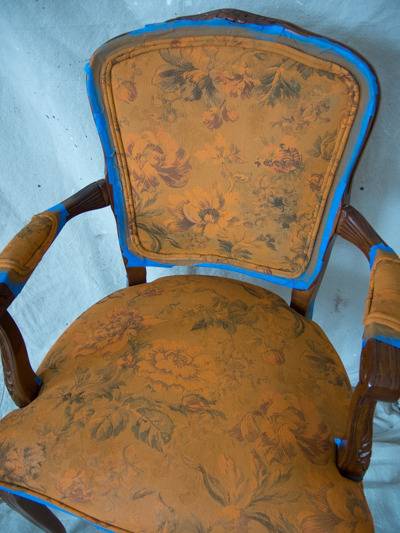 Annie says that painting a chair much like this one (upholstery/wood combo) takes “5 or 10 minutes.” Don’t take that literally, because that first coat took me over an hour. That’s not including the taping, which took another half hour or more.

And after two coats (this coat took a little less time to apply): When I applied the third coat, I noticed the paint started to ‘pool’ into the trim’s crevasses. (See below.) I didn’t like that at all. It looked too ‘painty.’ I scrounged in my recycling bin for a plastic container top, which I cut into a square. I used its points to cut along the trim to break the paint while it was still wet. That took care of the issue: And after the third coat, this is what it looked like: At this point, Sweetie Pie and I caucused. We decided the print was going to win. The paint may or may not ever hide it, plus, we kinda liked the way it looked. But what would Big Sis say?

She liked it too. Sort of. She wasn’t thrilled with the texture of the painted fabric. We both expected it to change, of course. Some might say it gave the paint a canvas feel. Yes and no. You know what a canvas painting feels like? Kinda crunchy? That’s it. She was iffy about the pattern peeking out. (If we did a do-over, paint-wise, we think a blueberry blue might have been better to cover the print.) BUT, she liked the orange!

Ultimately, I foresee a reupholstery job in the Victorian’s future. The good thing about this experiment is that Big Sis knows she’d like it in orange. So, you know, that’s good!